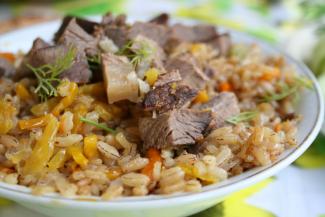 Kyrgyzstan stood on the crossroads of the Silk Road, and the caravan routes which crossed the territory carried not only goods for trade, but also brought examples of various cultures: Turkish, Persian, Arabian, Indian, Chinese, Russian and European and these mingled with the culture and traditions of Central Asia. As a result Kyrgyz cuisine has absorbed elements from all of the cultures with which it came into contact, and although many dishes that you will find are common throughout Central Asia, it is sill possible to find examples that have preserved their original, national identity.

Meat is central to Kyrgyz cooking - the nomadic way of life did no allow for the growing of fruit and vegetables - although these can be found in abundance in modern Kyrgyzstan. One of the most essential features of Kyrgyz cuisine is that dishes should preserve their taste and appearance. Sauces are intended only to bring out the taste of the dish - not to change it.

Boorsok - pieces of dough, deep fried in boiling oil - is a traditional table "decoration". They are produced in large quantities and spread over the derstokan or table at every major celebration.

Beshbarmak - perhaps the most typical Kyrgyz dish. The dish is meant to be eaten with the hands, not with a knife and fork! "Besh" means five and "Barmak"  - finger. Beshbarmak is served when guests arrive and at almost any festive gathering. This meal consists of noodles, which are mixed with boiled meat but into tiny pieces and served with a medium spicy sauce. Bullion is then poured over the mixture.

Shashlyk and Kebabs - meat cubes on skewers cooked over the embers of burning twigs. Mutton is the meat usually used, but it is possible to find beef, chicken, liver and even pork shashlyk. The meat may simply be freshly sliced or may gave been marinated overnight. Be warned, if the meat is mutton, then almost certainly one of the pieces on the skewer will be pure fat...the dripping fat onto the burning embers is thought to enhance the taste. Shashlyk is usually served with a sprinkling of raw onion, vinegar and lepyoshki.

Plov - rice mixed with boiled, or fried meat, onions and carrots (and sometimes other ingredients such as raisins), all cooked in a semi-hemispherical metal bowl called a kazan over a fire. Plov is a favorite dish in the South and is served to honored guests - the meal is not considered over until it has been served.

Lagman - flat noodles cooked in a stew of tiny pieces of mutton, potatoes, carrots, onions and white radishes. A Russian version, minus the noodles called Shorpo, can often be found.