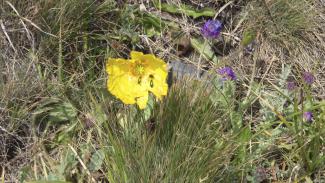 Flora and Fauna in Kyrgyzstan

Diversity of flora in Kyrgyzstan is determined by the altitudinal zoning. Slopes, varying by humidity, create different kinds of vegetation. On northern slopes steppes, meadow-steppes, meadows, bushes and forests are wide spread. On southern slopes, because of dry climate there are no zones of forests and alpine meadows; semi-deserts and deserts prevail here.

Flora of Kyrgyzstan numbers more than 3676 plants of lower species and 3786 plants of higher species. 600 types of useful wild growing flora are found in the territory of the Republic.

The most known plants of Kyrgyz Republic are:

The most widely spread trees are spruce, juniper (archa), and nut- and fruit-tree forests. There are also spruce, maple, poplar-willow, and birch forests and Tien-Shan rowan-trees grow everywhere. There are walnut forests occupying an area of over 600,000 hectares,  in the South-East of Kyrgyzstan in the Fergana and Chatkal ranges at altitudes between 1000 and 2200 meters a. s. l.

In alpine meadows (at an altitude of 3000 meters a. s. l.) edelweiss, dandelion, Alpine Aster, Semenov onion and primroses grow. Edelweiss is not as rare as it is in Europe. At certain times of the year the mountain sides may be covered with poppies or tulips. About 5 km south of the Jety Orguz sanatoria, is Dolina Svetov (Valley of the flowers) a valley opens out which is ablaze with colour from May — when there are multitudes of poppies — throughout early summer.

In the forests, steppes, and meadows it is possible to find many different species of funguses.

The Fauna is various enough and non-uniform by origin. The basis of fauna of region is made with the kinds typical for the central-Asian and Mediterranean regions. Here it is possible to find more than 500 kinds spinal, including 83 kinds of mammals, 368 kinds of birds, 28 kinds of reptiles, 3 kinds of amphibians, 75 kinds of fishes, 3000 kinds of insects. In summer on the Alpine meadows there is a brown bear, are concentrated the most part of a livestock arkhar, it is a lot of marmots, hares and mountain goats. Wolves are found also. Above a snow line on rocky ledges (up to height of 4,4 km) nest some kinds of birds. At height about 4500 m there are mountain goats, from predators - a snow leopard. Rare kinds of animals such as arkhar, the bison, goat, a red deer, a bear, the deer, a lynx, a snow leopard, are brought in the Red book.